Students looking to learn about computer forensics can find a variety of options from the undergraduate to graduate level, from certificates to full degree programs.  Check out the top 15 programs in computer forensics and digital forensics that are offered online. How to Become a Forensic Toxicologist – Education & Certification

Forensic toxicologists work in laboratories, often those operated by government agencies or law enforcement, to identify chemicals and compounds that could have contributed to crimes or have other administrative or legal consequences. This can include identifying illicit substances in bodies that may have been the victims of foul play, performing administrative drug testing, or identifying hazardous chemicals in the environment. 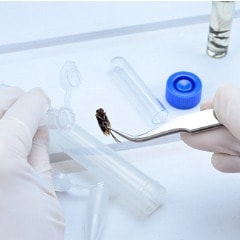 Crime-Fighting Insects: How to Become a Forensic Entomologist

The primary use of forensic entomology is in death investigations as insect activity can reveal when, where, and sometimes how a person died. That said, forensic entomology can also assist in detecting drugs and poisons; determining the location of a crime; finding the presence and time of trauma; and even tying suspect, victim, and crime scene to each other. Forensic science conferences usually consist of lectures and workshops by eminent experts, a space for vendors, and networking opportunities. Such conferences can also be unique educational experiences, and in some cases, offer continuing education credits for attendance.

Five Most Innovative University Forensics Labs in the U.S. in 2022

Those who practice forensics are essentially scientific detectives. They must reconstruct an event after the fact, through the study of biology, chemistry, and technology. Forensic professionals study ballistics, toxicology, questionable documents, fingerprints, DNA, and trace evidence. Their findings help to convict the guilty and exonerate the innocent.